If you need to find someone in prison, it is essential to know in what type of facility they are incarcerated. A prison, also known as a penitentiary or correctional facility, is where individuals are physically confined and deprived of various personal freedoms.

Individuals held within prisons and corrections facilities have been either charged with a crime or convicted of a crime. Individuals accused of a crime are incarcerated until they are brought to trial or released. Those who are officially charged with a crime will remain in a prison or jail facility until they complete the duration of their sentence.

An inmate is a person confined to an institution such as a prison (as a convict) or hospital (as a patient).

There are several reasons why you may want to locate someone, including:

Corrections refer to the supervision of persons arrested for, convicted of, or sentenced for criminal offenses. Correctional populations fall into two general categories: institutional corrections and community corrections.

Federal, city, county, state, and military officials operate most prisons. In some cases, private organizations run the facility under contract with a government organization.

The primary administrative officer in charge of a prison is the Warden. The Warden oversees the operations of the correctional facility. In addition, they manage the activities of the facility staff. Also, they are responsible for managing the existing facilities (buildings and equipment).

The federal or state government, city, or county employs most prison officers in many states. However, private companies employ many Correctional Officers as well.

As of this writing, there were approximately 500,000 prison officers in various facilities throughout the United States.

How to Find Someone Who is in Prison?

Whatever the reason, the easiest way to find someone in prison is to visit the website Vine. VINE is a website that lets victims of crime and other concerned citizens access information about offenders. The service is available via the website, a mobile app, and a toll-free number. Victims can register to receive alerts about inmate status changes via phone, email, and text.

To search, visit the website and select the appropriate state from the drop-down menu. After you make a selection, you will go to the corresponding state’s VINE home page. From there, you can search a statewide inmate database or drill down into county databases, where available. From there, you can find a specific offender, edit your registration details, or access additional resources.

Click on the “Find an Offender” icon to find an offender. From the next page, enter the incarcerated person’s last and first name. Alternatively, you can enter their inmate ID number if you have it. In addition, click on the “Advanced Search” link to add other search parameters. For example, you can add the Facility Name, Date of Birth, and Age Range.

In most states, the Department of Corrections website will have an explanation of how to search for incarcerated individuals. However, not all states provide online access to inmate records. I’m putting together a list of links to those states that offer online search forms, and I’ll post the links here soon.

Please note that the terminology used for the search forms and queries may vary from state to state. For example, you’ll see inmate locator, prisoner search, offender search, and incarcerated lookup. In addition, other states use terms like “residents” and “individuals in custody.”

How to Find an Inmate in a Federal Prison

To find someone in federal prison, use the Federal inmate locator. This tool allows you to search a database of federal inmates incarcerated since 1982. Once you find the individual, you can use the Federal prison facility locator to learn more about the specific facility where they are an inmate. This search provides details on the type of prison and the security level—for example, minimum security, maximum security, etc.

According to its official website, the Federal Bureau of Prisons has more than 119 prison institutions. Further, the Bureau includes six regional offices. Its headquarters is in Washington, D.C., with two prison staff training centers and 28 community corrections offices. However, these numbers change each year due to prison openings and closings. So, check the official website for the most up-to-date numbers.

The Federal Bureau of Prisons is responsible for the custody and care of over 200,000 federal offenders in the national prison system. Approximately 85 percent of these federal inmates are physically in correctional facilities or detention centers that the Federal Bureau of Prisons manages. The remainder of the inmates and confined through agreements with state and local governments. Also, through contracts with privately-operated community corrections centers, detention centers, prisons, and juvenile facilities.

The Federal Bureau of Prisons is also responsible for carrying out all judicially mandated federal executions (other than those carried out under military law) in the United States and maintains the federal lethal injection chamber in Terre Haute, Indiana.

How to Search an Inmate’s Background

If you need to learn more about an incarcerated person, a BeenVerified Background Search Report allows you to search billions of public records online in just a few seconds. Search for criminal records, bankruptcies, and more. In addition, you can search for people using an address, phone number, and email search. BeenVerified offers an easy and affordable way to run a background search.

For more in-depth stats, visit the Bureau of Justice Statistics. The Bureau provides data and research on state and federal prisoners, jail populations, probation, and administrative data on jail facilities and staff.

What Do Private Investigators Need to Know

Private investigators and law enforcement officers should be familiar with prisons. In some cases, people will hire a PI to help find someone who is in prison. In addition, PIs often enter prisons to talk to inmates who may have been a party to a crime or witnessed some act.

If you have any questions about how to find someone who is in prison, jail, or otherwise incarcerated, please leave a message below.

Police Resources June 28, 2022 2
In today's technologically savvy age of the smartphone, almost anyone can record and share live video footage of events in real-time. The question of... 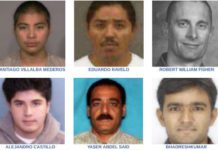 List of Most Wanted Criminals, Fugitives, and Terrorists in the U.S.