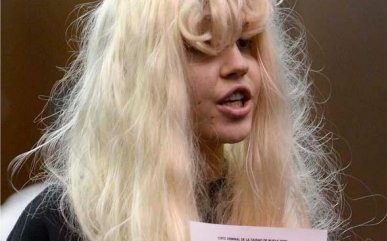 Amanda Bynes is an American actress who starred in television series and feature films. She has been a familiar face in celebrity news in recent years, often for strange reasons. Her story of odd behavior began in early March 2012 when California police stopped her for using a cell phone when driving. Soon after this incident, law enforcement in the West Hollywood area pulled her over and charged her with driving under the influence (DUI). This was just the beginning of a long series of strange incidents, arrests, and court appearances for the young actress.

In September 2012, the actress was arrested for a hit-and-run automobile accident. As a result, the DMV suspended Bynes’ driver’s license. The charges were ultimately dismissed when she offered a financial settlement to the hit-and-run victim.

In March 2013, Bynes was once more on the front page of celebrity news sites when she was arrested for possession of marijuana at her home in Manhattan. Related to the case, she was also charged with tampering with evidence and reckless endangerment. Following the arrest, a judge ordered the actress to undergo a psychiatric evaluation at a hospital before being processed at the police station. Also, related to this incident, Amanda Bynes accused the arresting officers of sexual harassment, a charge the police department denied.

The following incident occurred when she was arrested for starting a small fire in the driveway of a stranger’s house near Thousand Oaks, California. This bizarre event led to Amanda being hospitalized and kept under a 72-hour hold for a mental evaluation. In August, her parents filed for a conservatorship to assume control over her finances and health. The judge agreed that she lacked the capacity to give informed consent. As a result, she entered the Canyon Treatment Center in Malibu, California, to obtain treatment.

After completing the rehabilitation program at the Canyon Treatment Center, Amanda moved in with her mother. Tamar Arminak, the family lawyer for the Bynes, issued a statement saying that the family is grateful to everyone who has contacted them with good wishes for Amanda’s safe and speedy recovery. Sources reveal that Amanda is eager to move out of her mom’s home and into her place, but she will likely remain with her mother for at least a few more months.

The 27-year-old actress wanted to start a clothing line and even completed a course in fashion design. She has been commuting regularly to class and is working hard on her career.

Strange behavior by celebrities is nothing new. However, most celebrities spiral out of control and end up dropping off the scene altogether or dying from a drug overdose. This is one positive example where her parents cared enough to get fully involved and take control of the situation. Now, Amanda is back on the path to getting her life together, and her parents are happy to have their daughter back.

If you have any comments about Amanda Bynes and her odd behavior, please post a comment below. Also, get the scoop on other celebrity investigations.

Do you need to track someone? Learn how to track them using the latest cell phone trackers and GPS Tracking devices.

Do you need to market your private investigation agency? Join our Private Investigator Directory and connect directly with people who need to hire an investigation professional.